By all appearances, Hot Toys has presented a post-civil war Captain American Sixth Scale Figure as accurately as possible. I don’t really know, I haven’t seen Avengers: Infinity War yet, so I can’t really be the judge of that fact. What I can note is that Captain America is presented with a pair of Wakanda shields gifted to him from T’Challa (The Black Panther). It also appears that an outrider will be included in this set for Cap to pummel. I’m all about the future pummelings. Captain America’s figure will be available April-June 2019 and retails for $267.00 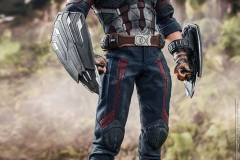 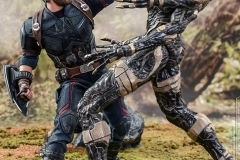 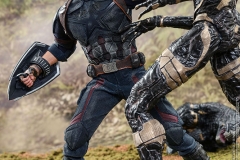 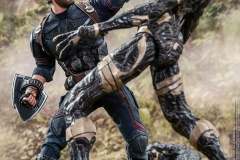 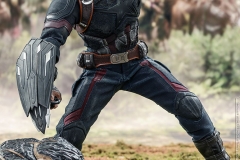 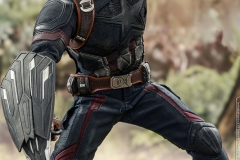 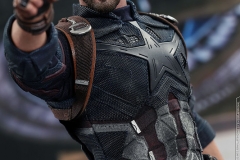 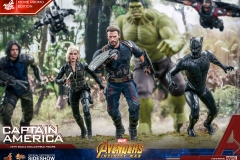 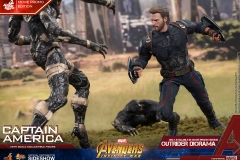 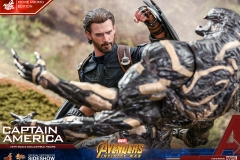 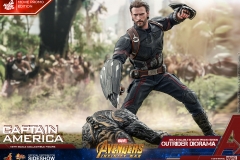 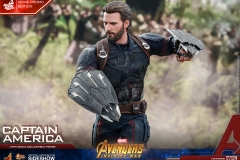 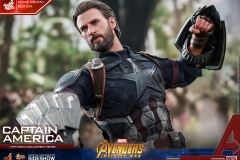 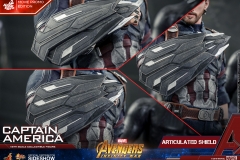 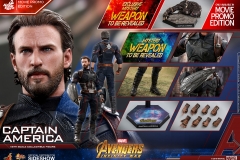 ABOUT THIS SIXTH SCALE FIGURE
“Get this man a shield.” – T’Challa

It’s all been leading to this. Captain America, the super-soldier has remained under the radar while continuing to do what he believes is right – saving the world one clandestine mission at a time, is assembling again with the Avengers in order to save Earth from the menacing threat of Thanos!

With exquisite craftsmanship, the true-to-movie sixth scale Captain America is meticulously crafted based on the appearance of Chris Evans as Captain America/Steve Rogers with an incredible likeness. The realistic looking collectible features a newly developed head sculpt with detailed hair and beard, a muscularly-toned body which portrays Captain America, a striking newly tailored Captain America suit with battle damaged parts on chest revealing the scale patterns underneath. This figure includes a pair of articulated shields from the technologically advanced nation of Wakanda, a specially designed movie-themed figure stand, and a mystery weapon.

The very special movie promo edition of the figure will feature a highly detailed Outrider diorama which can be attached to the figure stand, and an additional exclusive mystery weapon to be revealed after the movie release. This stylish and extraordinary interpretation of the Captain America figure is a unique collectible for fans and collectors and it is only available in select markets!

Don’t pass up on this special opportunity to unite your awesome Avengers’ team from the Marvel Cinematic Universe with the most up-to-date sixth scale Captain America (Movie Promo Edition) collectible figure by Hot Toys.

One (1) pair of newly crafted black-colored articulated Wakanda shields with silver-colored trim
One (1) Mystery Weapon to be revealed after the movie release
Accessory:

One (1) Exclusive Mystery Weapon to be revealed after the movie releases
One (1) Outrider diorama with interchangeable rocky ground graphic card attachable to the hexagonal figure stand
ADDITIONAL DETAILS & DIMENSIONS
Expected to Ship
Apr 2019 – Jun 2019
Item shown is a prototype. When shipped, the final production piece may differ in appearance.