The Rebel Terminator is part of Sideshow Collectibles Mythos collection which posits that a terminator has been created that will allow the rebel alliance to infiltrate and destroy the machines. While this terminator doesn’t exist in any continuity, it’s an interesting idea. It’s a shame that the Rebel Terminator doesn’t have a proper name. She looks like she could be named Madge, Rose or Butterbean even and the rebels would be able to personalize her more. Then again, it’s possible that the rebel terminator doesn’t have a personality as she could be just used for one job. Either way, I’m sure that the rebels would be glad to have her on their team unless she gets hacked or something by the other terminators or Skynet or whatever mad genius could work for the opposition. The Rebel Terminator will be available next December and retails for $575. 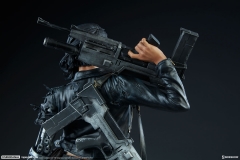 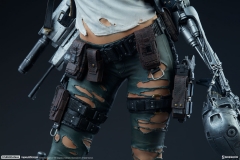 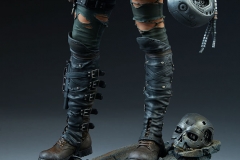 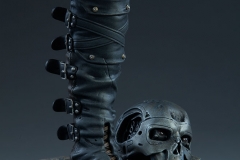 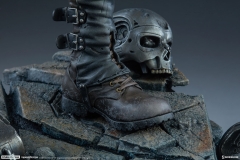 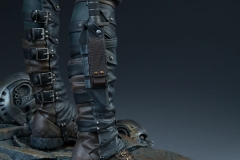 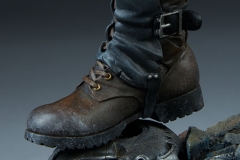 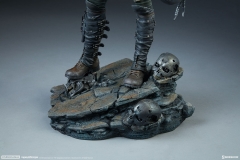 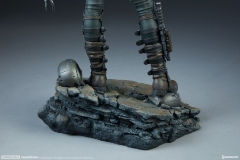 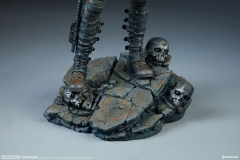 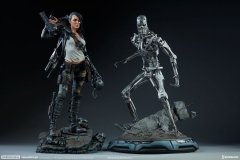 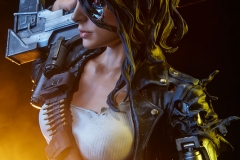 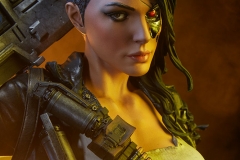 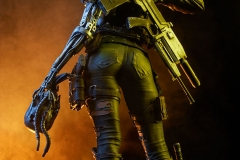 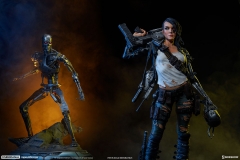 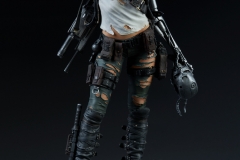 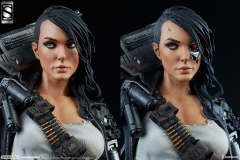 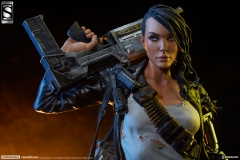 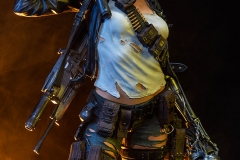 ABOUT THIS PREMIUM FORMAT™ FIGURE

“A war is raging between what’s left of the human race and Skynet. Both sides eagerly search for any advantage… The Rebel Terminator is born.”

Sideshow is thrilled to present the Rebel Terminator – Mythos Premium Format™ Figure, a powerful new ally in the struggle against Skynet.

As a collection, Sideshow’s Mythos series captures the limitless possibility of fan-favorite franchises by emphasizing core themes and introducing unique story details to popular fictional universes. The Rebel Terminator emerges as an exciting new figure whose story blends seamlessly into the mythology of the Terminator franchise, personifying the spirit of technology and resistance to spark the imagination of fans everywhere.

The Rebel Terminator stands 19.5” tall on a cracked battlefield base littered with debris and decommissioned endoskeleton skulls. Battle damage from her deadly hunts reveals the renegade assassin’s own mechanical features- an exposed arm and piercing red eye tell the story of the Rebel Terminator’s mysterious past.

“The endoskeleton is such an amazing design, and the balance between human and machine is incredibly important to this character,” Senior Sculptors and Designers Brian and Dennis Kucharek explained. “We wanted the human part of her to outweigh anything else- in the end, it’s her humanity that makes her who she is- a Rebel Terminator.”

The resin Rebel Terminator – Mythos Premium Format™ Figure features an incredibly detailed sculpted costume, consisting of a black jacket, white undershirt, green pants, and combat boots. Her rugged look is textured with tatters and tears to reflect the raging battle against the oppressive forces of Skynet.

The Rebel Terminator shows no signs of slowing down in her directive, clutching a severed endo-skull in her mechanical hand. Already preparing to eliminate her next cybernetic target, she holds a 40-watt plasma rifle triumphantly over her shoulder. Another plasma rifle hangs at her back, amid a variety of tactical gear and pouches to protect her human façade from further destruction.

“The Rebel Terminator serves as an ally to the resistance and a reminder to Skynet that the human spirit is not easily conquered by the machine,” the Kucharek brothers added.

Rise up against Skynet and add the Rebel Terminator – Mythos Premium Format™ Figure to your collection today!

Expected to Ship
Dec 2018 – Feb 2019
Item shown is a prototype. When shipped, the final production piece may differ in appearance.